First, there was Bitcoin. The original idea was to serve as a medium of exchange that was digitally native, immutable, and not controlled by any institution. However, aside from considering it as a store of value, inflation hedge, or payment option, its utility was limited. Other developers quickly realized that the underlying technology, ie blockchain, had great potential, which gave rise to other protocols. From there it was a rapid evolution from smart contracts to decentralized applications (DApps), non-fungible tokens (NFTs), and so on.

Any developer or entrepreneur considering building a blockchain application must decide on which protocol it is based on. Although we frequently read about protocols like Solona, Avalanche, or Polygon in the newsflow of the cryptocurrency space, these have a less than 10% combined market share. 85% of the tokens (6,948) are based on just two protocols: Ethereum and BSC.

The Rise of the BNB Smart Chain

Ethereum is old for the cryptocurrency space as it was launched in 2013. BSC is like the new kid on the block and has only been around since September 2020. However, within a few months of its launch, the number of tokens started to rise significantly. In 2021 and 2022 year-to-date, more tokens were created using BSC than Ethereum, which highlights the rapid evolution and constant change of the cryptocurrency space.

We observe that there were tokens based on BSC before 2019, but these were launched elsewhere and migrated to BSC after 2020. 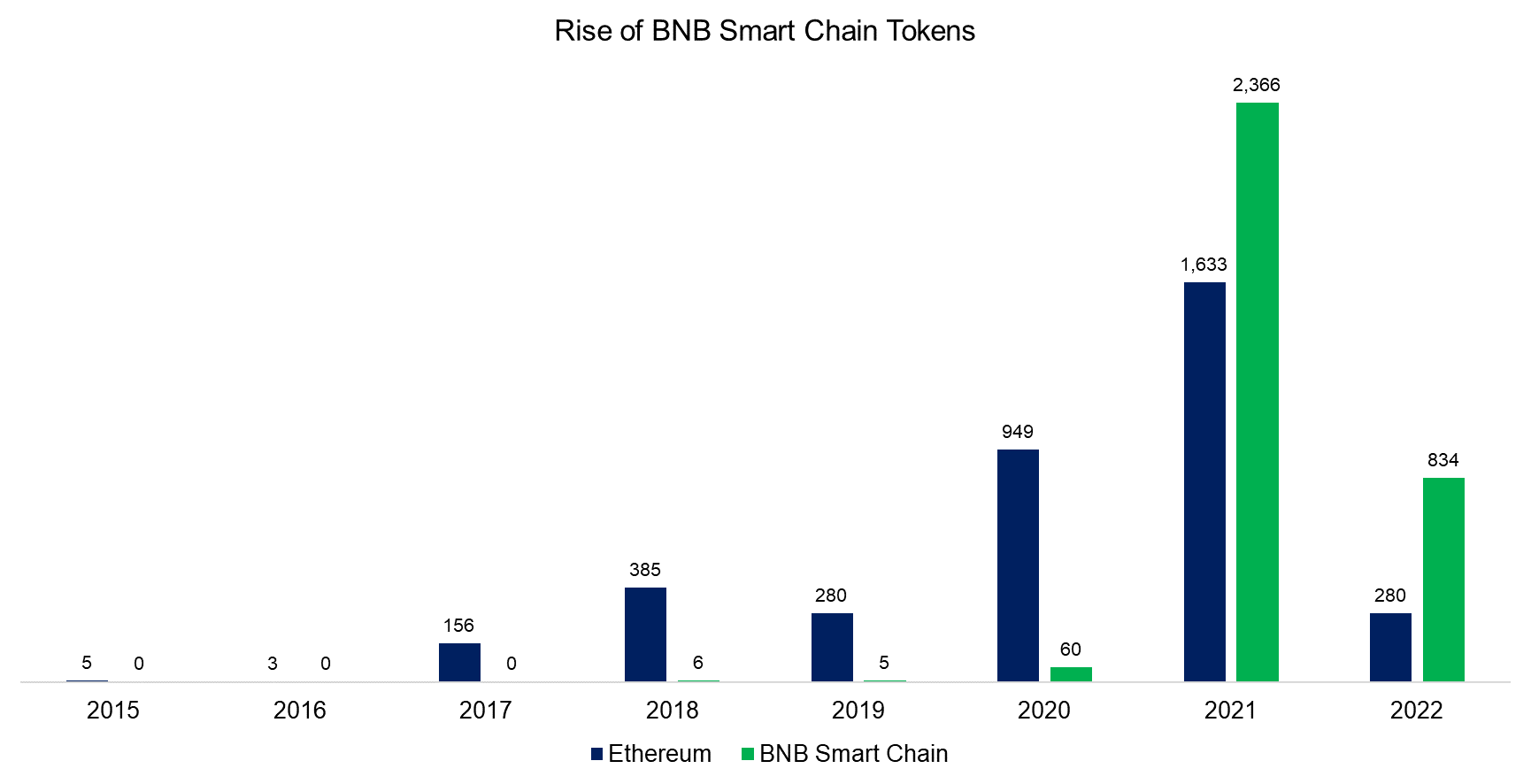 Although the total number of tokens based on Ethereum and BSC is about the same, the market capitalization of Ethereum is almost 5 times that of BSC. Naturally the number of tokens is one characteristic to measure the success of a protocol, but the size of the tokens and resulting blockchain utilization is another one. For example, USDT (Tether) is based on ETH and is a very popular token given its central role in moving money through the cryptocurrency space.

Bitcoin’s total market capitalization is higher than Ethereum and BSC (native coin and token) put together, which is somewhat surprising. The role of Bitcoin is largely diminished as its unsuitable for tokens, and also does not serve as a great store of value given its price volatility. It retains the supremacy as being the largest cryptocurrency, but that is based on its first-mover advantage rather than utility. 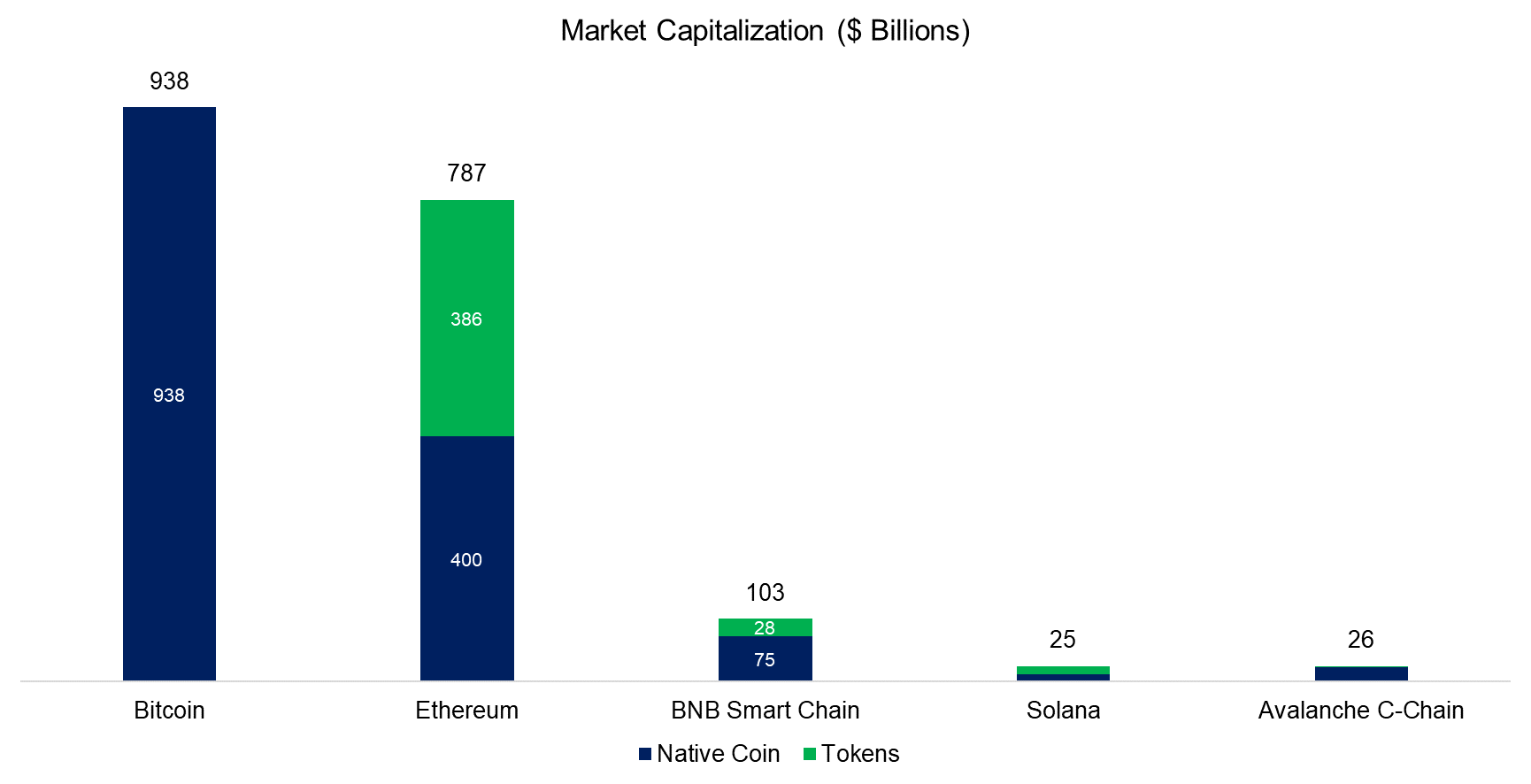 Gas refers to the unit that measures the amount of computational effort required to execute a specific operation. Gas limit refers to the maximum amount of gas units the user is willing to pay for a transaction. For e.g., each block in Ethereum has a target size of 15 million units of gas and depending on the network demand the size can go up to 30 million units of gas. BSC increased the gas limit to reduce the fees to compete with Ethereum. Basically, by increasing the gas limit, more transactions can be processed in a block for lower fees. 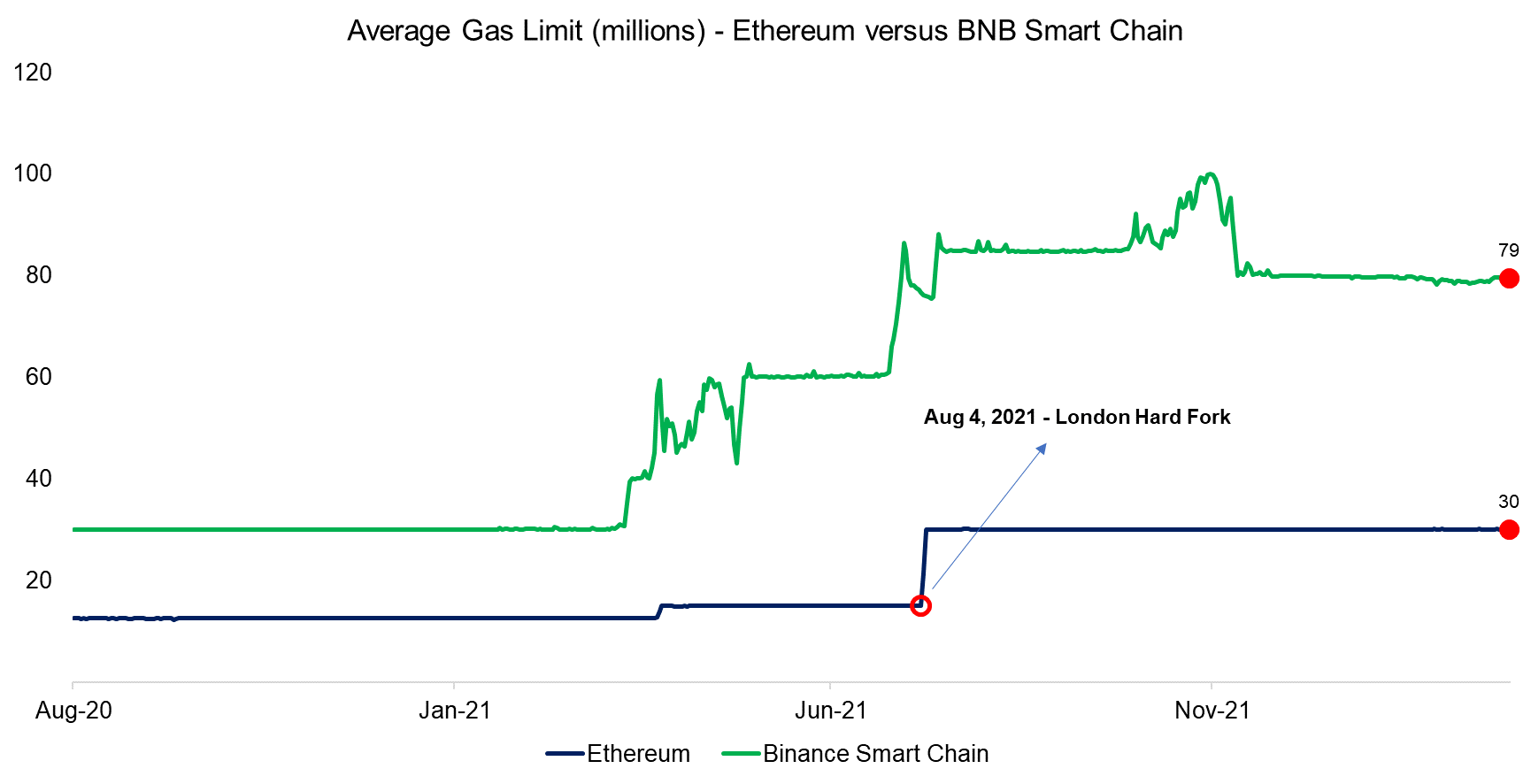 After the upgrade of London Hard Fork, the Ethereum network now automatically calculates the gas price based on demand for a block space instead of the auction model. This makes the gas price more predictable and less volatile. Unfortunately, this upgrade didn’t lead to a decrease in gas price. 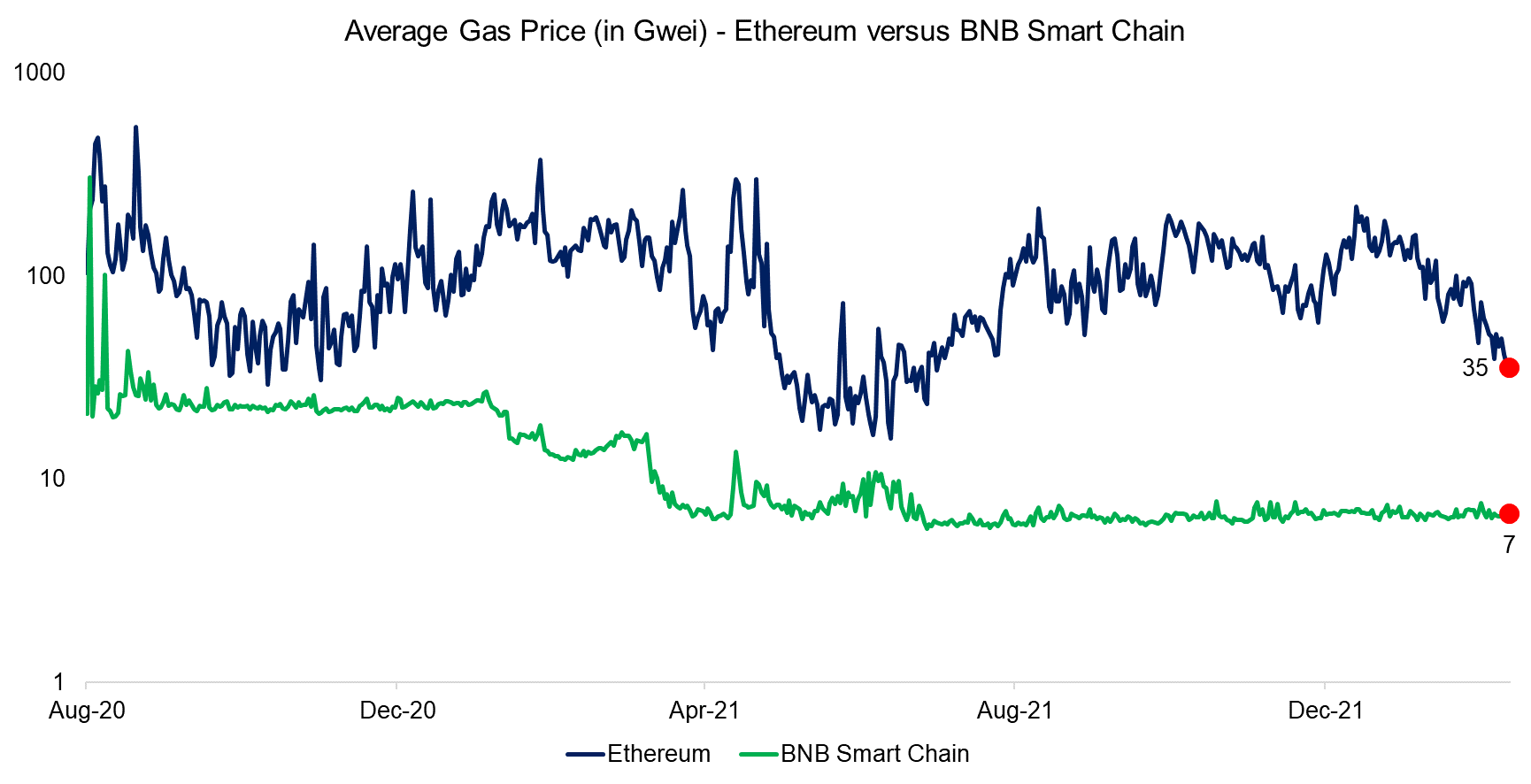 On average, BSC takes ~3 seconds to verify a block compared to 10-14 seconds in Ethereum. This means that a typical BSC transaction is likely to be executed 4 times faster than an Ethereum transaction. PoSA allows BSC to validate the blocks faster than Ethereum’s Proof of Work (PoW).

Somewhat unusual, during May 2021, the block time shot up to 800 seconds for a couple of days. Either it was a data error or some network-level issue in the mainnet of BSC. 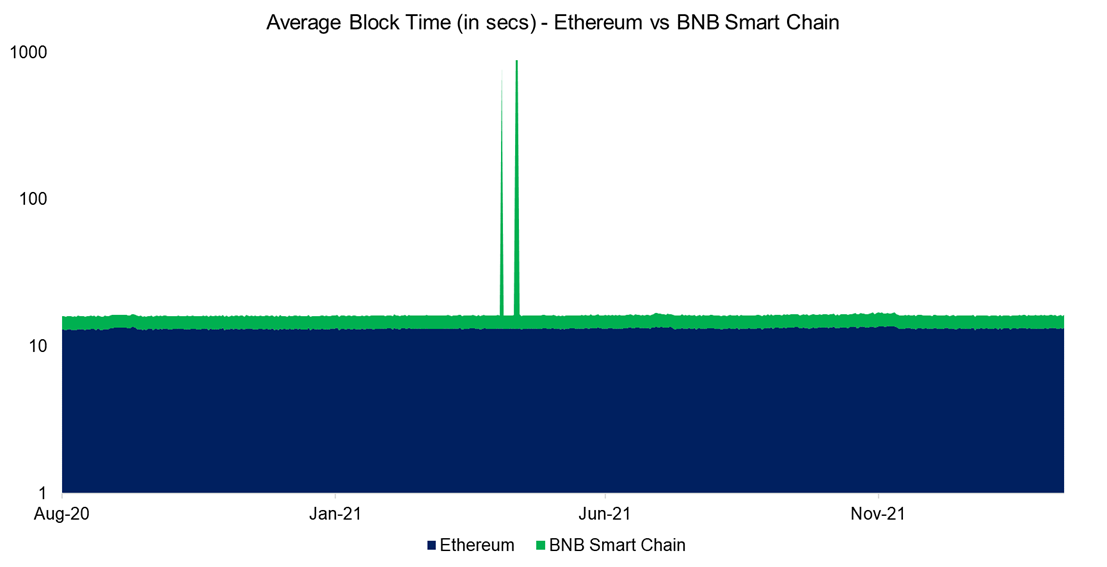 BSC has been able to challenge Ethereum because of the higher gas limit that reduces the gas price. It is worth highlighting that BSC can be considered a cheaper clone of Ethereum. If needed, Ethereum can easily increase the gas limit to lower the fees, but it comes at a cost of sacrificing decentralization and security.

Binance, the parent company of BSC, has divided its architecture into two different token standards: one for handling cryptocurrency transactions (BEP2 or Binance Chain) and another one for interacting with DApps (BEP20 or BNB Smart Chain). This dual architecture reduces the computational load on one single blockchain, especially with BEP2 which handles a large volume of transactions each day. Ethereum developers are working on solutions like “sharding” that are expected to come with Ethereum 2.0. It is speculated that the sharding could boost the scalability of the Ethereum network by over 64 times.

Both protocols have their pros and cons. On one hand, Ethereum is expected to receive a fundamental upgrade soon, which changes the consensus mechanism from PoW to PoS, making transactions on Ethereum quicker and cheaper. On the other hand, BSC is offering cheap gas prices by sacrificing decentralization and security. Overall either protocol requires to finetune the balance between decentralization, security, and scalability to be a dominant player in the long run. 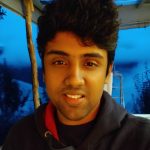