Equity Crowdfunding: Still in Line for Take Off

Crowdfunding: What is it?

In 2016, Zach Brown raised more than $50,000 on Kickstarter to make a bowl of potato salad. Starting with a goal of £10 to buy his ingredients for the potato salad, Zach went on to raise a whopping $50,000 and has since gone on to release a recipe book called ‘The Peace, Love and Potato Salad Cookbook’. Well, that is the power of crowdfunding campaigns in today’s internet age. Investopedia defines crowdfunding as the use of small amounts of capital from a large number of individuals to finance a specific business, cause or a project. Crowdfunding draws inspiration from the concept of microfinance and crowdsourcing.

During the past few years, different forms of crowdfunding have emerged. The two key categories are the following: 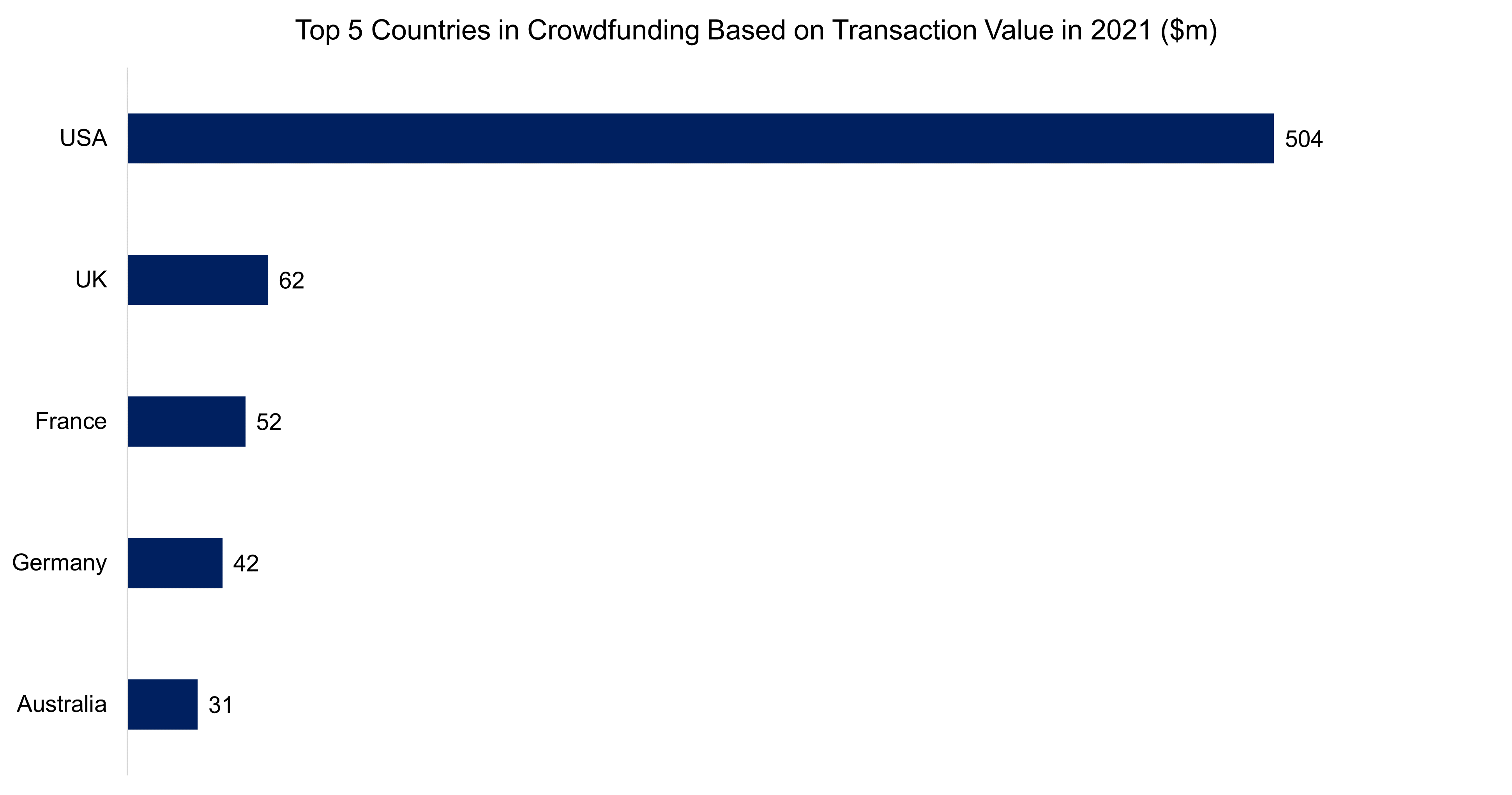 Next, we provide an overview of some of the largest crowdfunding platforms. The fees range between 1% to 12% of the transaction volume and are often combined with fixed fees for listing the projects on the platforms. 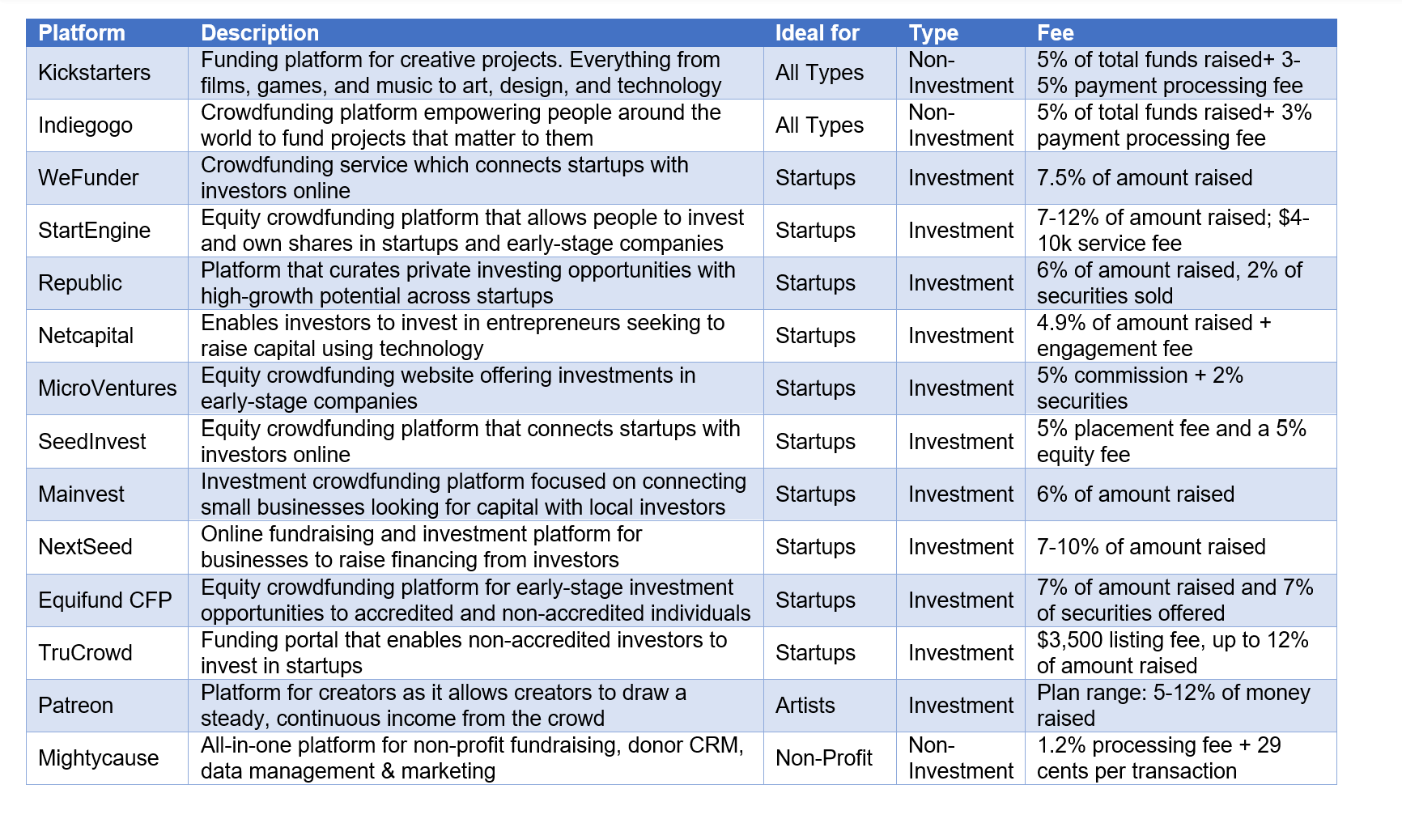 While the inception of modern-day crowdfunding can be traced to 1997 when a British rock band funded their reunion tour through their fans but the real seeds of equity crowdfunding were sown in the during the 2008 global financial crisis when capital became scarce and entrepreneurs could not get money from the traditional sources of finance. While companies like AngelList were existing, but they were not essentially a true crowdfunding platform as they function as a syndicate pop-up venture capital fund with a limited number of people pooling money and also provided a bouquet of other services to startup founders including a recruitment platform to hire relevant folks.

With the large-scale arrival of internet and an ever-increasing adoption of crowdfunding as a source of finance, it reached the White House in Washington DC and in 2012 Jumpstart Our Business (JOBS) Act was signed into law which redefined the equity crowdfunding ecosystem in the US. Now a company could raise up to $5 million over a twelve-month period, crowdfunding websites will display business plans/funding requests on their site and anyone will be able to view them and decide whether to invest or not.

When this act was passed, one of the most prominent venture capitalists, Fred Wilson, suggested that venture capital could be swept away altogether by a flood of crowdfunding money that will be unleashed by the JOBS Act. According to his line of thought, if each family or individual invested 1% of their assets in crowdfunding, it will equate to around $300 billion, but this has not turned out to be the case.

The total amount of equity crowdfunding raised in the US through various platforms stands at meagre $209m for 2020. This number appears minuscule when compared to $156bn raised by 10,862 startups in 2020 (as per National Venture Capital Association) from various venture capital firms, which comes out as $428m daily on average.

Therefore, even though equity crowdfunding has been there in the US for quite some time, it has failed to appeal to startup founders as well as investors as large. 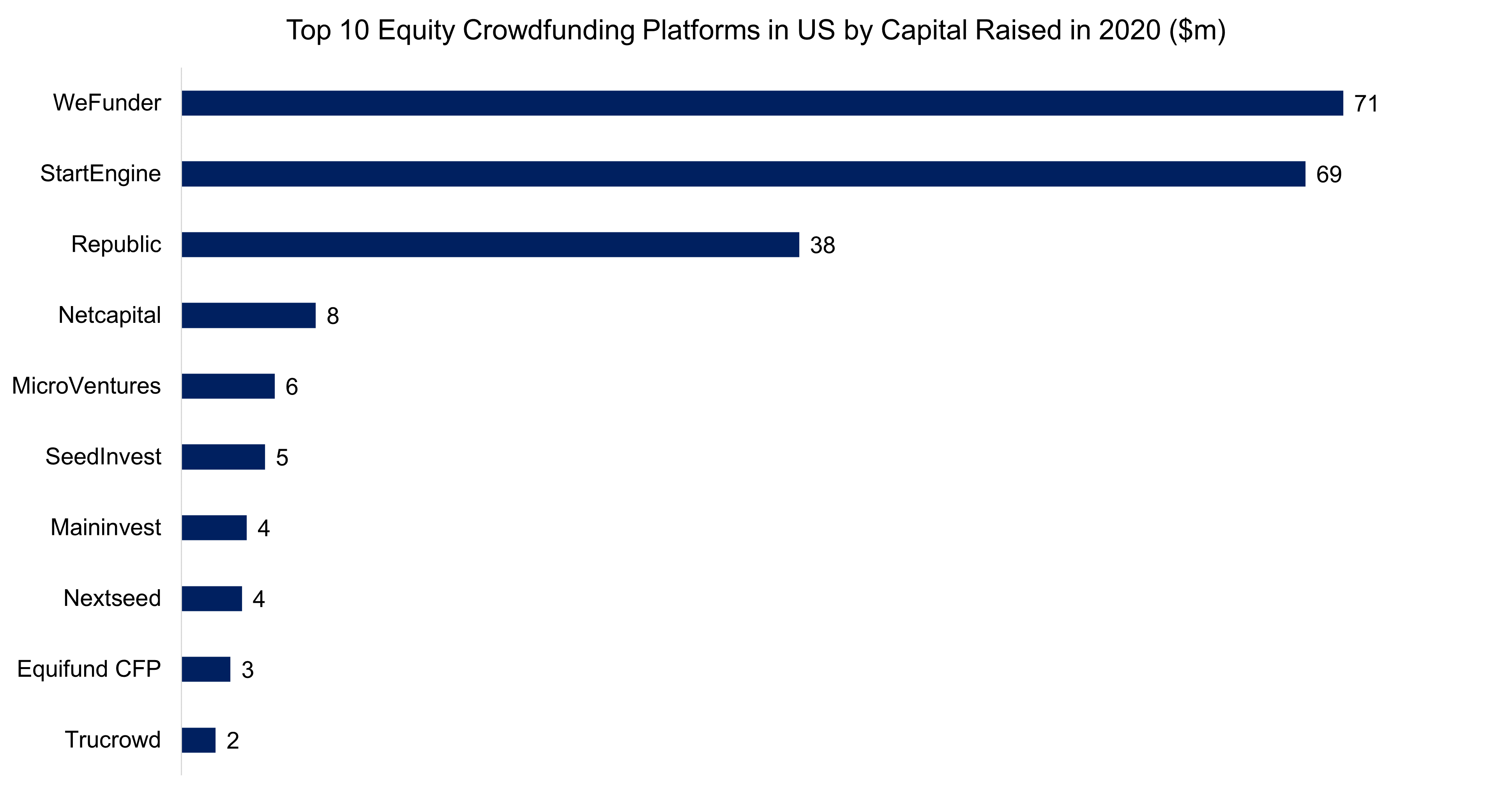 As per an article by Crunchbase News & Fundz.net, in 2020 the average valuation for a startup in US raising seed round was $6m, for series A was $15.6m & series B was $30m. The average valuation for startups raising equity via crowdfunding points to a conclusion that those were relatively small ones, mostly in seed stage. Often, in most cases these are the ones which are unable to raise capital from angel investors and venture capitalists and resort to crowdfunding as a last resort. 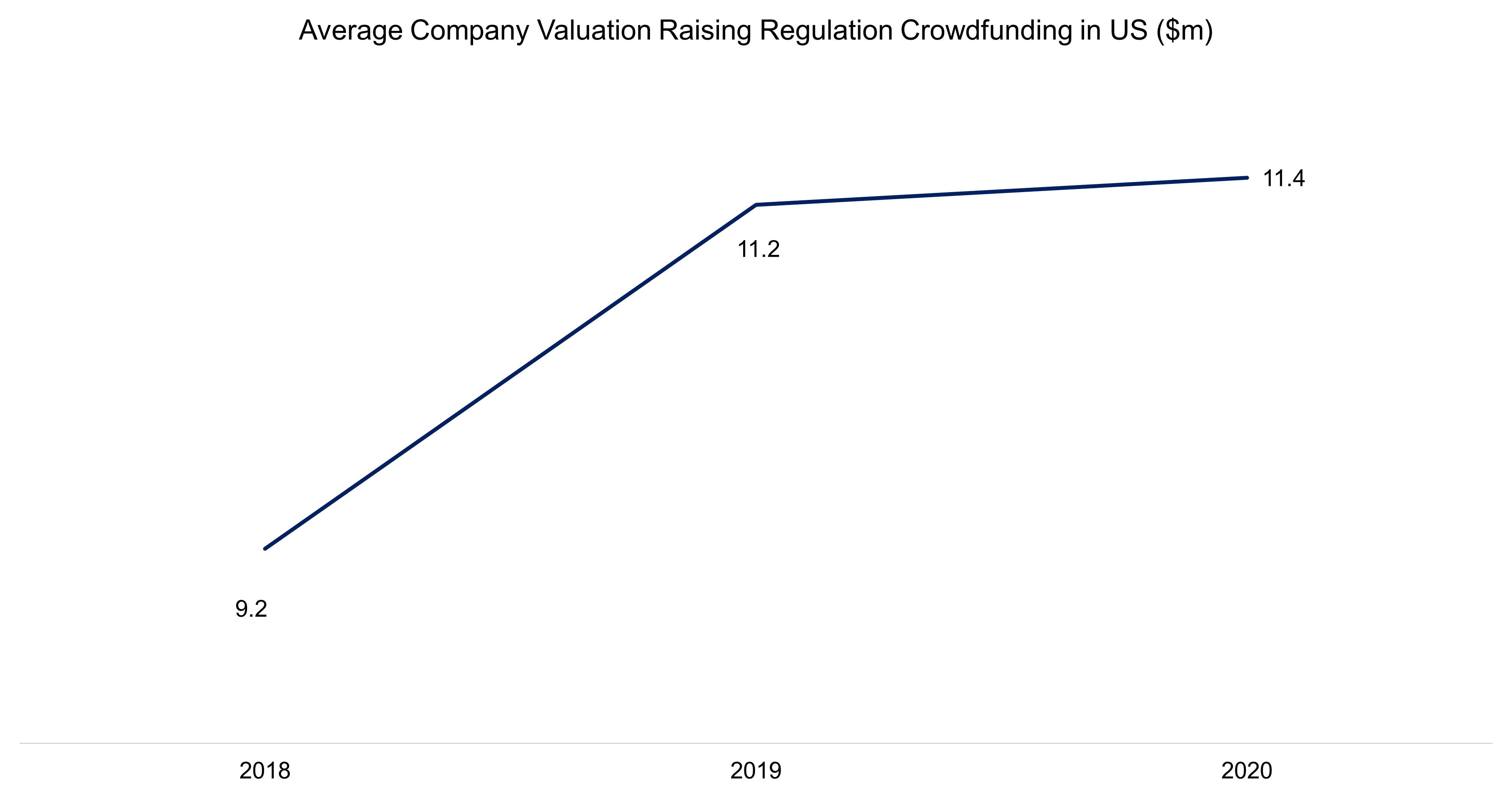 Often it is argued that crowdfunding is an alternative to venture capital but from the company and investor perspectives, there are some issues which limit the success of crowdfunding platforms.

Company Perspective: The use of crowdfunding can result in a situation where VCs could be deterred from investing in future rounds of financing. Crowdfunding creates a capital structure that is unappealing to VCs. VCs have little interest in competing with masses of retail investors, because they do not want to deal with the inconveniences that may arise from having numerous shareholders.

Investor Perspective: Most of the investors lack experience to evaluate an investment opportunity, thus could end up making sub optimal decisions. Even if the investor makes a sound investment into a successful startup company through a crowdfunding opportunity, and the company conducts itself in a legitimate manner, the investor still may not realize an above-average financial return (high risk-high return concept) due to the absence of investor protections against horizontal risk. The concept of horizontal risks relates to the fact that promising investment opportunities in startups appeal to competing investors, who are often sophisticated VC’s. Without adequate protections similar to those available to VCs, an early-stage crowdfunding investment, even in a successful startup company, can result in significantly lower financial returns. Thus, it comes as a no surprise in one of the reports by SEC that 85% of the crowdfunding campaigns failed during 2019.

The success of an enterprise cannot be guaranteed only by financing. Even promising enterprises can fail without an adequate business plan and support structure. It is critical for entrepreneurs to recognize that raising capital is a means to an end, not a goal in itself. Additionally, for growth companies that plan to seek venture capital, using equity crowdfunding early on may signal weakness to a venture capitalist. As indicated by the above numbers, crowdfunding should not be considered as an alternative to venture capital and should be used after due diligence by founders i.e., if the company requires 1,000 retail investors that each put in $5,000 or raising $250,000 or $500,000 from venture capitalists?

For individuals wanting to get into the angel-investing game, and who don’t have assets of $1 million or more, buyer beware. Investigate the details of the crowdfunding platform and the startup you plan to invest in. The investors need to keep in mind that just because an investment is accessible or affordable, it doesn’t automatically qualify as a good one. Carefully research the company, its management team and the quality of the investment being offered before investing any dollar.

Sidharth Sachdeva, CFA, FRM, is a finance professional working in the investment team of Jackdaw Capital. He has previously worked as an Investment Specialist with Invest India, the National Investment Promotion & Facilitation agency of the Government of India. Prior to this, he worked with Goldman Sachs in the Investment Banking Division covering the natural resources sector. 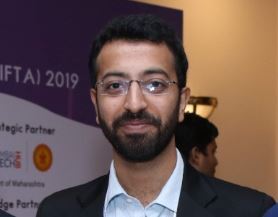